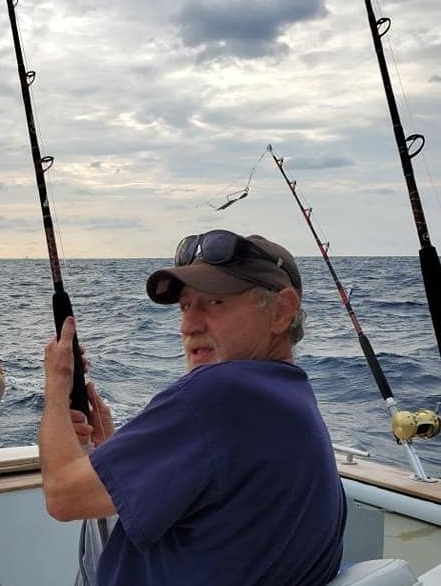 Please share a memory of Palmerico to include in a keepsake book for family and friends.
View Tribute Book

Palmerico (Rick) DiManno, 64, of Rodanthe, NC (formerly of Ridgefield Park, NJ), passed away peacefully at home on October 24, 2022 after a prolonged illness.

Born to Palma (DeFilippis) and Americo DiManno in Lenola Italy, Rick spent his younger years in the nearby mountain village of Passignano. The family migrated to the United States in 1963.

His collegiate years began at Ramapo College and then Potomac State College of West Virginia University (where he met his wife Renee) and culminated at Juniata College where he earned his bachelor's degree in Finance. After graduation he began working in New York City at the A&E channel where he worked for 33 years. He achieved the title of Director of Finance for all A&E Networks. In 2020 Rick and his wife Renee were both retired and moved to the beach.

Rick was predeceased by his mother Palma and his sisters Paula Pagliaro and her husband Nick and Nella DiManno. He is survived by his wife Renee, son Rick and wife Greta, two beautiful beloved granddaughters, Charlotte and Fiona, his father Americo, his brother Ben and wife Elaine, his sisters Eralba and Jelsy, his sister Josina Fasullo and husband Paul. His nieces Elisa Bachev and husband Jake, Christina Tyson children Dean and Kara and husband Adam, Victoria Wirth and husband Ryan, Gina Hollien son John and husband Sam and Niki Diamond. Rick is survived by two nephews, Carlo Pagliaro and Paul Fasullo. Along with many other aunts, uncles and cousins in the USA, Italy and Australia.

Rick loved spending time with family and friends. His beloved niece Alina Bachev was his partner in goofing off, general shenanigans and chocolate chip pancake eating marathons. Holidays were his favorite, big Italian family gatherings where eating and storytelling began in the afternoon and ended well into the night.

Services will be held at Vorhees Ingwersen Funeral Home on Saturday, October 29th from 10AM to 12PM. The prayer service will be held at 12PM with interment following at Maple Grove Park Cemetery in Hackensack.

Share Your Memory of
Palmerico
Upload Your Memory View All Memories
Be the first to upload a memory!
Share A Memory
Plant a Tree