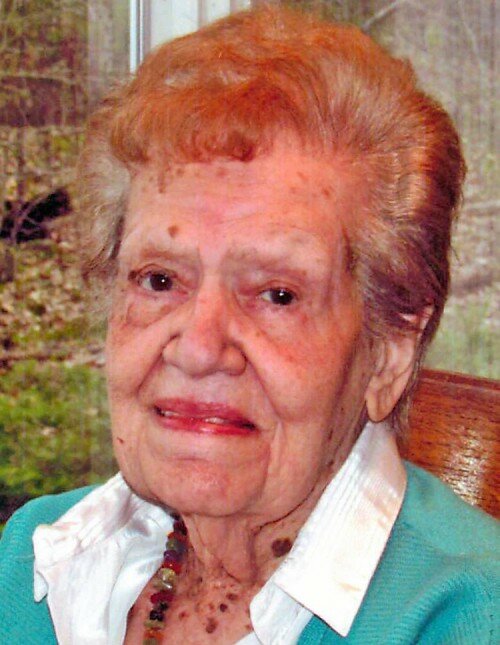 Please share a memory of Catherine to include in a keepsake book for family and friends.
View Tribute Book

Caterina L. (nee Miglioresi) Quercia, age 99, passed away peacefully on the morning of Sunday, September 26, 2021 at her Hodgdon Green residence in Damariscotta, Maine. December would have been her 100th birthday.

Her parents, Giuseppi and Maria, were from Italy and settled in New Jersey where Catherine and her four younger sisters were born and raised. Besides English, she learned, not only to speak, but to read and write Italian. Catherine attended school to age fourteen when she got her first job sewing in a dress factory to help support the family. She became quite the seamstress through the years and used her talents making dresses, costumes, and even gowns for family and friends. She married Frank J. Quercia and had two children, Carolyn and Raymond.

Eventually, she and her husband resided for many years in Ridgefield Park, NJ. At age fifty, desiring a career change, Catherine enrolled in classes and earned her high school equivalency diploma. She was then employed at Orbach's as an assistant in management. She served as a volunteer at H&R Block during tax time, as a secretary in the local Senior Center, and a helper in other various community organizations. Catherine was a faithful member of the Catholic Church.

Walking sometimes more than 5 miles a week was a regular routine. Traveling and dancing with her husband, working crossword puzzles, reading biographies, and attending many family events were her favorite activities and...she made the best homemade pasta around.

After the passing of her husband, Catherine moved into her son-in-law and daughter's home in Nobleboro, Maine. There she became the oldest member of St. Patrick's parish in Newcastle.

Although slowing down, she believed "you're never too old" for something new and joined the cast of Hearts Ever Young (H.E.Y.) the local theatrical group composed of the "more senior" members of the community. Not only did she make new friends in the cast, but, at the age of 97, she made her dancing and singing debut on stage! Her favorite routine was a duet with her friend, Lila. Catherine sang a part of, "Eh Compare" in Italian and on key... to the delight and surprise of everyone.

In 2019, because of Catherine's physical decline and diagnosis of Alzheimer's, she moved to Hodgdon Green Assisted Living in Damariscotta where she received kind, loving care.

Services for her immediate family will be held on Friday, October 1st from 8:30AM to 10:30AM at Vorhees Ingwersen Funeral Home. The funeral mass will be offered 11AM at St. Francis R.C. Church in Ridgefield Park. Entombment will follow at George Washington Memorial Park in Paramus. In lieu of flowers, donations from friends and family may be made to: Elder Care Network, ℅ Hodgdon Green, PO Box 652, Damariscotta, ME 04543.

Share Your Memory of
Catherine
Upload Your Memory View All Memories
Be the first to upload a memory!
Share A Memory
Plant a Tree