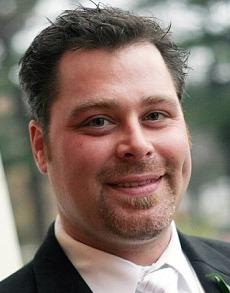 Please share a memory of Matthew to include in a keepsake book for family and friends.
View Tribute Book
Galas, Matthew E., "Matty G.”, age, 41, of Hasbrouck Heights formerly of Ridgefield Park, passed away peacefully surrounded by his family's love on Monday January 2, 2017. Matty was born in Bayonne and raised in Ridgefield Park where he was a local athlete. He was an All Star Shortstop and Captain of Don Bosco Prep's 1993 baseball team. Matty began his college baseball career at Manhattan College and continued at Saint Rose in Albany where they won the Division 2 World Series in 1997. He also coached at Saint Rose for two years. He then joined the family masonry business, Cage Construction in Hackensack where he held the position of Vice President for the last 12 years. Matty was a volunteer at the Saint Francis Food Pantry in Ridgefield Park. He fell in love in 2005 and married in 2008. Beloved husband of Rachel (nee Noia). Devoted father to his sons Danny and Robby. Cherished son of Joanne (nee Gilson) and Edward Galas. Dear brother to Jill Galas Hickey and her husband James, Vanessa Hlavaty and her husband Michael, and Jodi LoCascio and her husband Anthony. Loving son-in-law to Bob and Diane Noia and brother in law to Adam Noia, Tim Noia and his wife Rachel. Adored Uncle to Owen, James, Mikey and Christopher. Matty will be greatly missed by the “Justice League” as well as his family and many close friends. Funeral Mass will be offered at Saint Francis RC Church Saturday at 10:30 am (please meet directly at the Church). In lieu of flowers, the family suggests donations in the memory of Matty for the benefit of his sons College Funds which can be made to the Daniel and Robert Galas Scholarship Fund and mailed c/o Vorhees Ingwersen Funeral Home, 59 Main Street, Ridgefield Park NJ 07660. The family will receive family and friends at the Funeral Home Friday from 2-8pm. Entombment George Washington Memorial Park, Paramus. Vorheeswingwersen.com